Literacy and Technology go together hand in hand in this day and age. 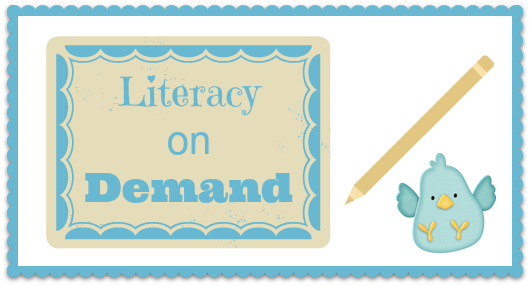 Last summer, as September approached, my wife (and your lovely hostess here) was more than a little bit panicked. You see, three years earlier, when our daughter was heading into JK (that’s junior kindergarten, or “pre-K” for some of you) she was already working with a fairly substantial list of sight words; not to mention her printed words were far above what was expected of a four year old. Our son? Not so much. Despite her best efforts, my wife could never engage him in literacy-building activities the same way his sister did. It was just not his thing,

Over the course of the school year, thanks in no small part to an amazing teacher, he started to get interested in reading and printing. When summer came, his interest waned a little, but eventually he started expressing an interest in earnest again, and since then we have been encouranging literacy development at every opportunity.

One such opportunity that presented itself recently was with television. Our TV provider offers Treehouse On Demand; an on-demand offering of childrens’ content suitable for younger viewers (similar to Nick Jr. in the US). Up until now, if my son wanted to watch something other than what was being broadcast at that time, he relied on either one of us, or his sister, to load the on-demand channel, navigate the menu, and start the show. I knew that with his understanding of phonetics he could figure out what most of the menu options were, and if not, the worst thing that would happen is he would get the wrong (yet still age-appropriate) show and then be able to connect those words with that content.

Kids can remember a lot more than we realize. Ours have known for years what channel numbers are “safe” – even when we go visit my parents with a completely different lineup. They remember and ask their grandfather to change it to a specific number (whichever one of three or four they know have safe content, like Treehouse or Disney Junior), so getting him to memorize the on-demand channel was easy.

Once he knew that, we chose one specific show he asked for most often (Babar and Badou – featuring the voice of the amazing Gordon Pinsent) and learned what top-level menu option contained it (unfortunately, the top-level menu for THOD is not the best; some specific shows get their own option, while many others are in a grouped folder with a generic name such as “Treehouse Favourites” – which begs the question, is there a hidden folder called “Treehouse Junk” or “Treehouse Ratings Black Holes”?). From there, we looked for shows that started with “B” (for, you know, Babar) and sounded out our options until we found the right show.

For a day or so, he capably navigated the menu and found his favourite show. Then, he started to get bored of it (I know; the shock that a four year old can bore of something). He then chose a random option, and I prompted him…

“Hey bud. What are you watching?”

“I dunno. Something else.”

“What show is highlighted?”

“Thomas?” he asked, seeing that the first letter was “T”.

“Are you sure? Let’s sound it out. What are the first three letters?”

“OK, and if we look at just those three letters, what word it that?”

“Right. And what letter is next?”

“Good. And what sound does that make?”

“Exactly. Now, what letter is at the end there?”

“Too Puh Eee. Toopy. That says Toopy and Binoo! I don’t want to watch that.”

(Neither do I. Toopy and Binoo is a Quebecois cartoon about a rat and his stuffed cat who go on imaginary adventures that has been dubbed into english. The animation is more than a little weird, and generally speaking the show is kind of messed up.)

The point was, he was able to read the menu option, avoid it, and then we went through a similar process to identify Franklin and Friends (which, whiny turtle aside, is a much better option for my sanity). And the proud grin he had while it started was worth more than the knowledge that I would no longer have to disrupt my work to choose another show in the menu for him.

This is just one example of how using technology can encourage and develop literacy. As with any skill, a child will only learn it once they are ready, and interested enough to do so. If a little television is encouragement for building a vocabulary, I’m OK with that.

One Response to Literacy on Demand {Techie Tuesday}