Before I start my review of the Google Nexus 7, I have to confess that I am fully immersed in the iOS (that’s Apple iPhone and iPad) ecosystem. I’m also an electrical engineer by trade, with a lot of programming under my belt.

So… yeah. This isn’t going to be your typical Multi-testing Mommy review. Sorry about that. 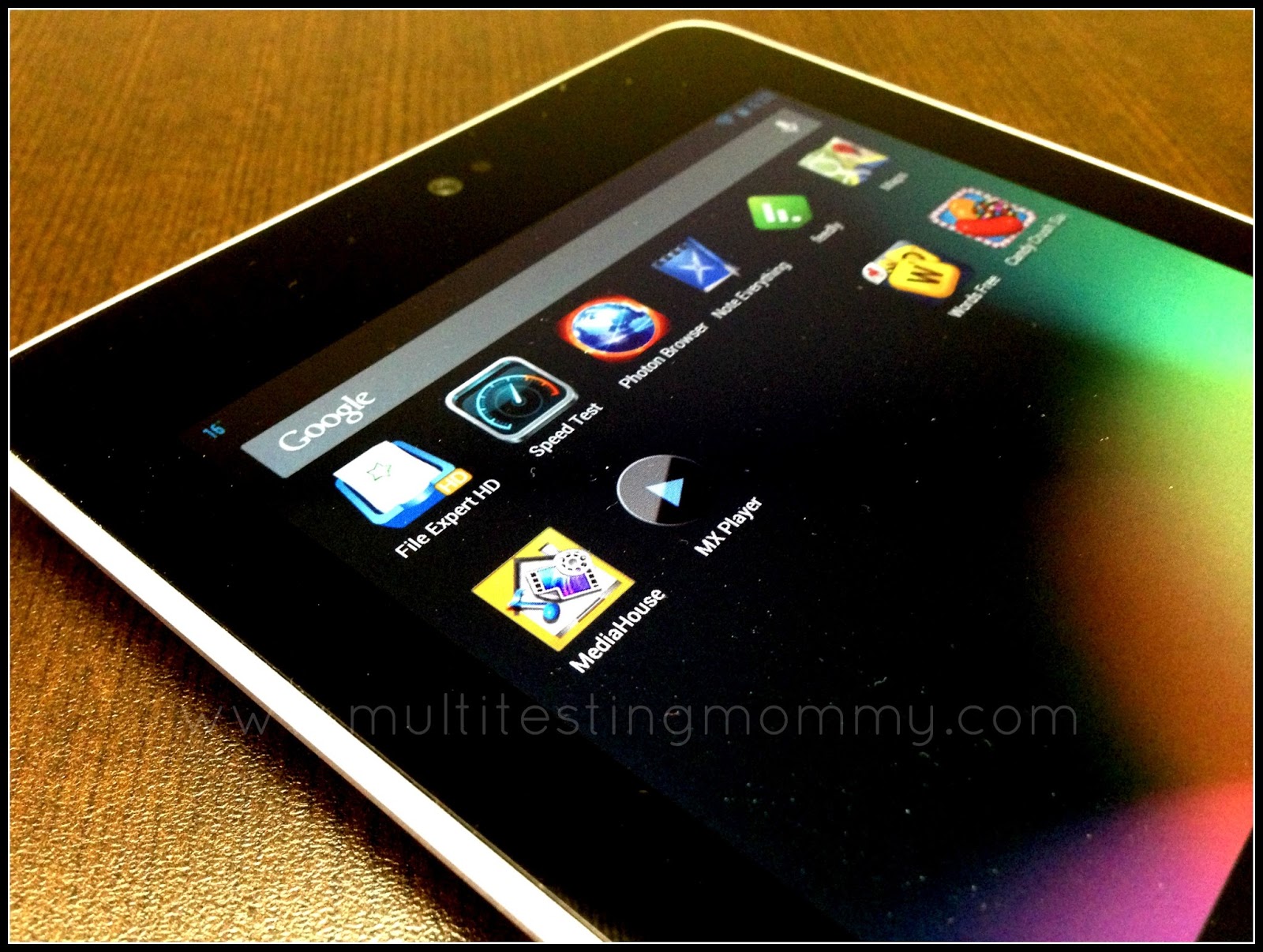 The Google Nexus 7 is an Android tablet running Jellybean. Mine shipped with 4.1.1, but was clamoring for an update as soon as it could access the internet, after which it was 4.2.2, which is the latest version as of this writing. The key specs and features are as follows: 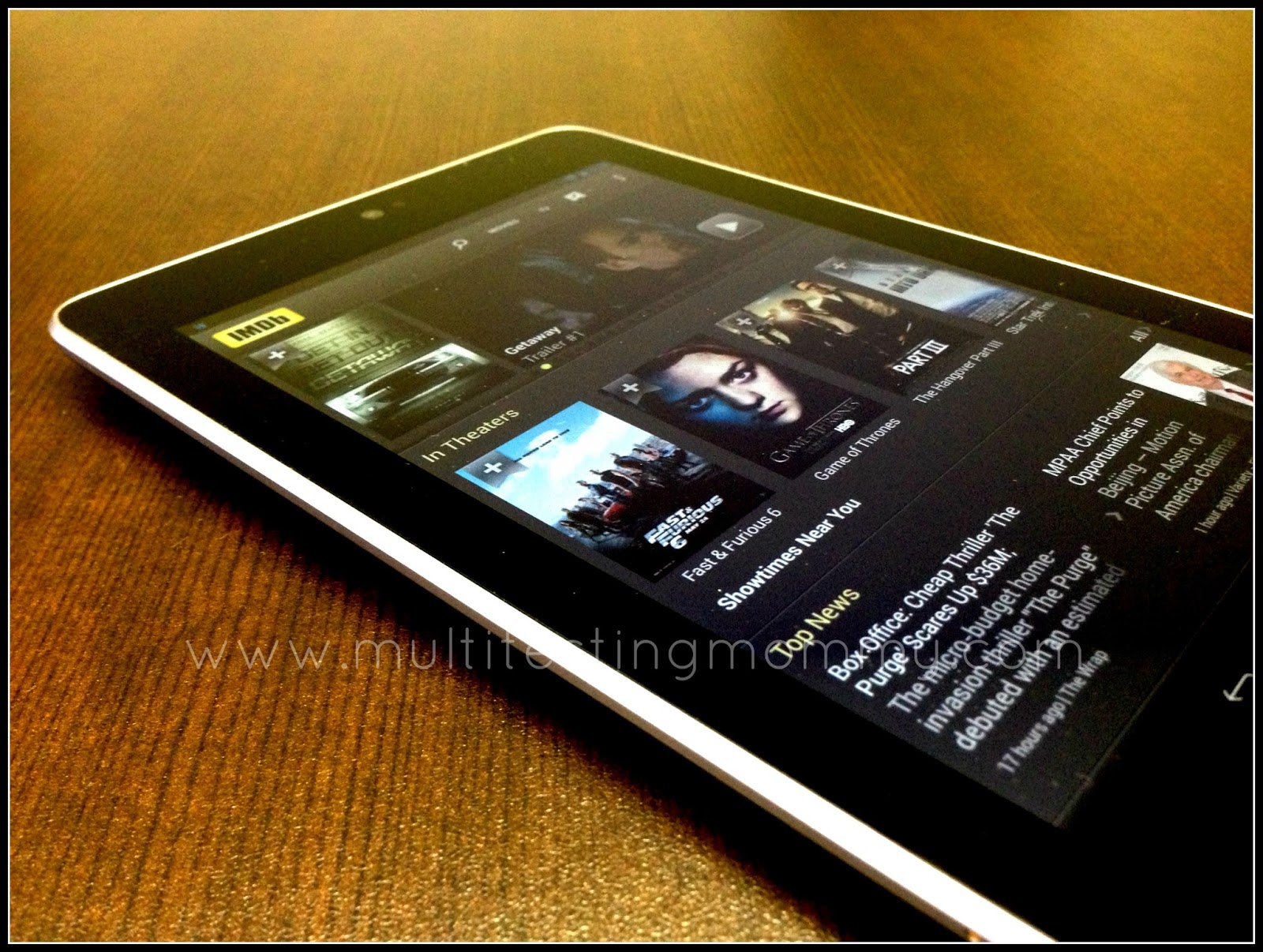 We had a previous tablet running Android 4.0.3 (yes, even Apple boys have Android toys), so when I logged in to Google Services on the Nexus 7 it immediately offered to download all the apps I had previously gotten on my other tablet, which was a nice surprise compared to the experience I’ve had using iTunes backups to setup new devices. And it didn’t end there: the next morning when I brought it into work, one of my colleagues (another iOS user) immediately snatched up the Nexus 7, and following occured:
Me: So since you have it, can you add the office WiFi in Settings?
Colleague: OK. (pause) I don’t need to. It’s already there.
Me: Really? I didn’t do that.
Colleague: Huh. Must have come across with the Google stuff last night.
Both of us: Cool. (Also, a little scary. Be careful with sensitive information out there, folks. The cloud is always listening – and taking copious notes.)

The Nexus 7 fits comfortably in the palm of my hand, unlike other 7″ tablets which are just slightly too wide for me to palm easily. The back is plastic, but has a rubbery feel to it as well. The amount of extra grip this provides is neglible, however. There are just two buttons: a volume rocker, and a multifunction button that handles sleep, power-off, airplane mode, and mute. It’s a bit heavier than other 7″ tablets, but not overly so, and unless you’re doing a comparison one after the other, you wouldn’t notice the difference. 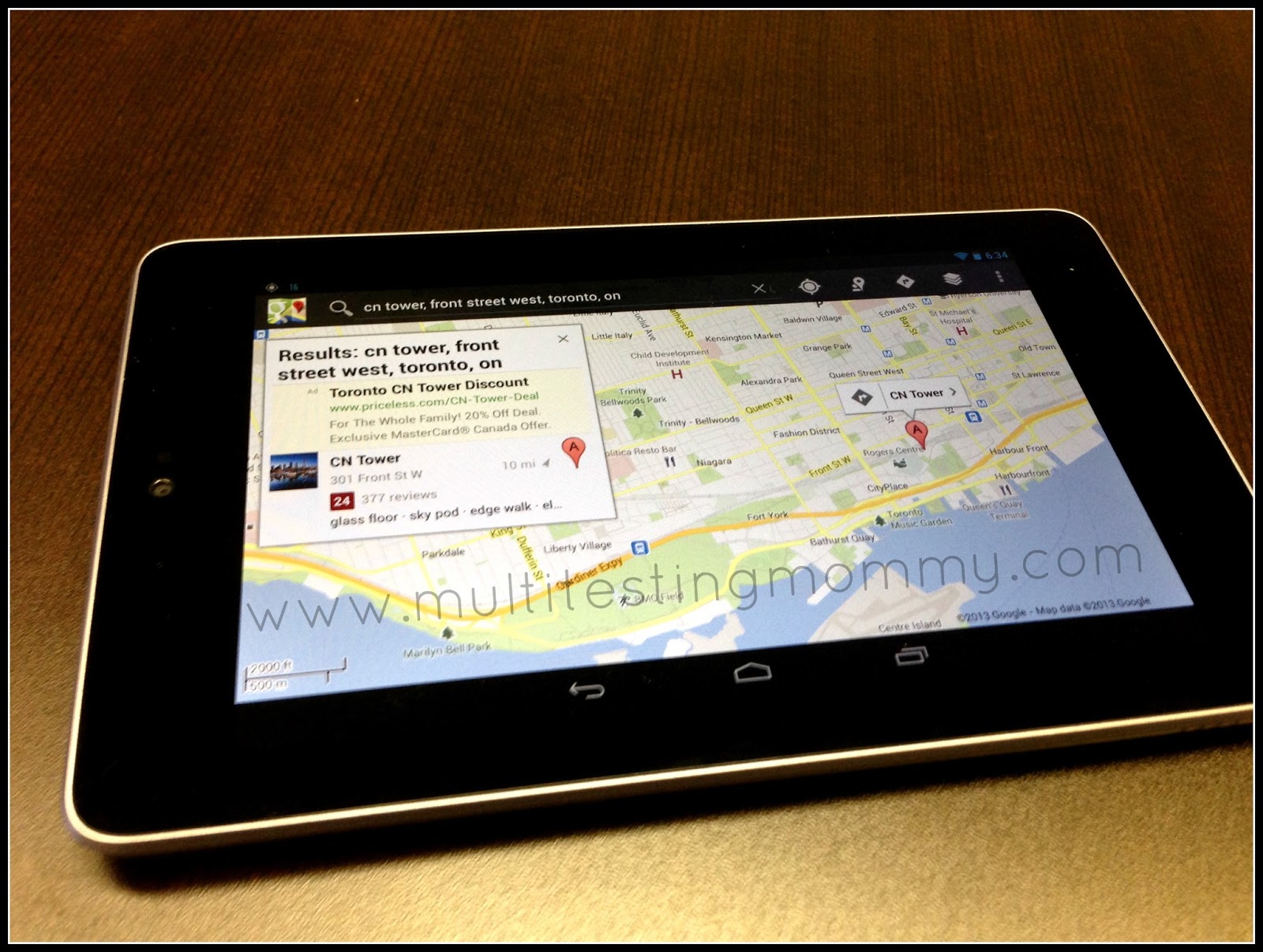 As for ports, there’s only one: a micro USB connection that provides both sync and charge capability. I have to say, having a non-proprietary (cough – Apple – cough) interface was a welcome change, as was the ability to just plug my Nexus 7 into my Windows 7 laptop and immediately be able to drag and drop files to it. (This is something even our other Android tablet was incapable of.) If you’re a media hound, you’ll likely get a lot of use out of this feature because the only storage available in the on-board storage; there are no microSD or other peripheral ports here.

The touchscreen is quick and responsive, and swiping between screens and applications is seamless. The Jellybean OS really shines on the Nexus 7, and I can say that I appreciate the buttonless, three icon (back, home, list) system of Android. The Google Play store may not be able to boast the same number of available applications as other vendors, but what’s there is plentiful and, with the exception of the most particular and/or unique needs, will be more than sufficient for the majority of users. 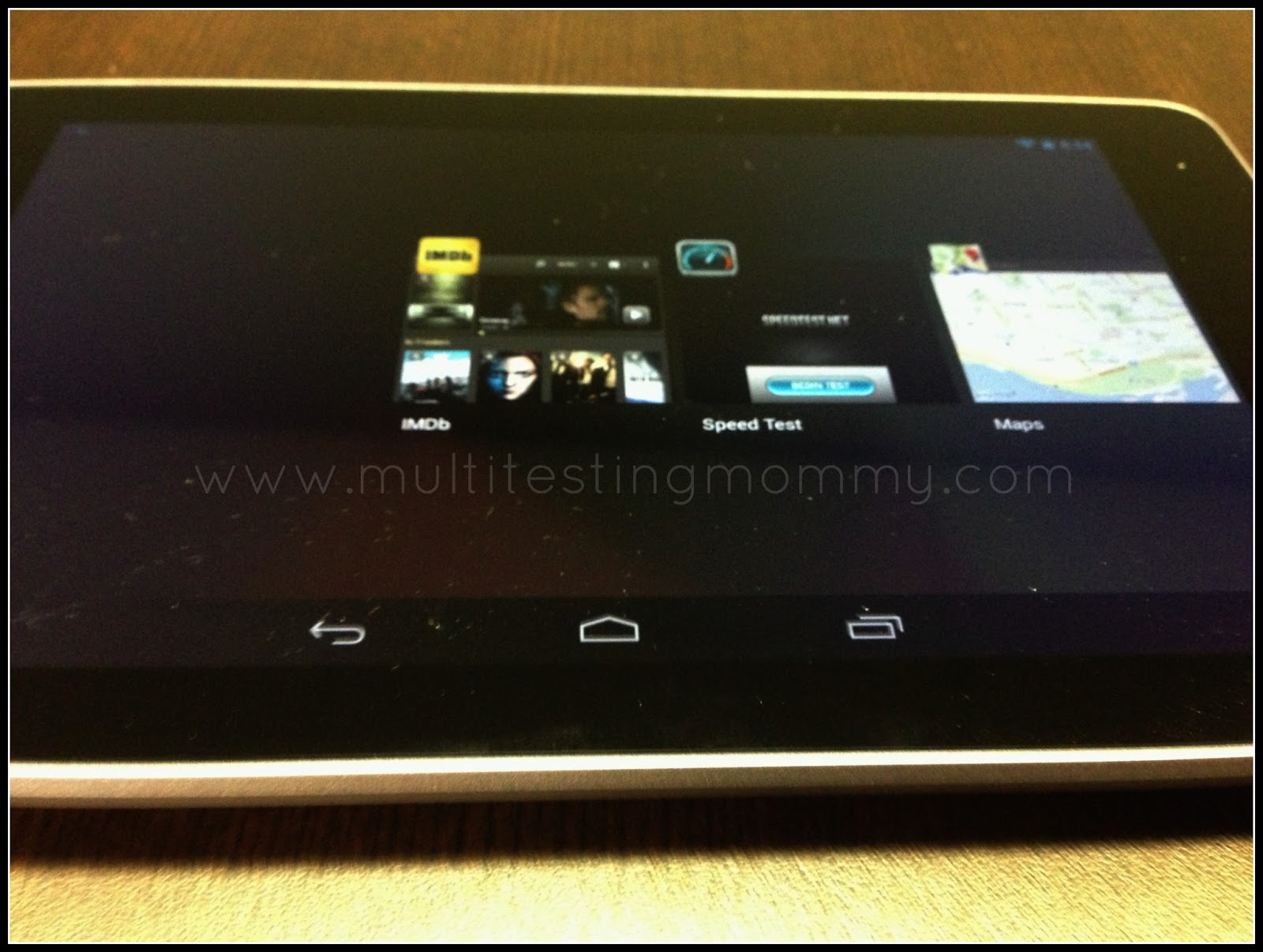 One note that I have to make is with regards to fragmentation on Android devices. Because Apple operates a closed ecosystem (in other words, they make the OS and the devices themselves), they can ensure a consistent user experience across all devices. Android, with its open-source nature and multi-vendor support, sacrifices consistency for choice. One such example that I encountered was with Adobe Flash. (I know; Adobe has officially discontinued support for Flash on Android, but coming from iOS, that feature was the one thing I was most curious about, even if it is supposedly being phased out in favour of HTML5.) The other Android device (a Toshiba Excite) came with a stock browser with native Flash support. The Nexus 7, with Chrome as its default browser, does not support Flash out of the box, and even after trying several browsers from the Play store, I was unable to get a similar experience. I’m not saying this makes or breaks the OS or the device, but it speaks to a greater concern. 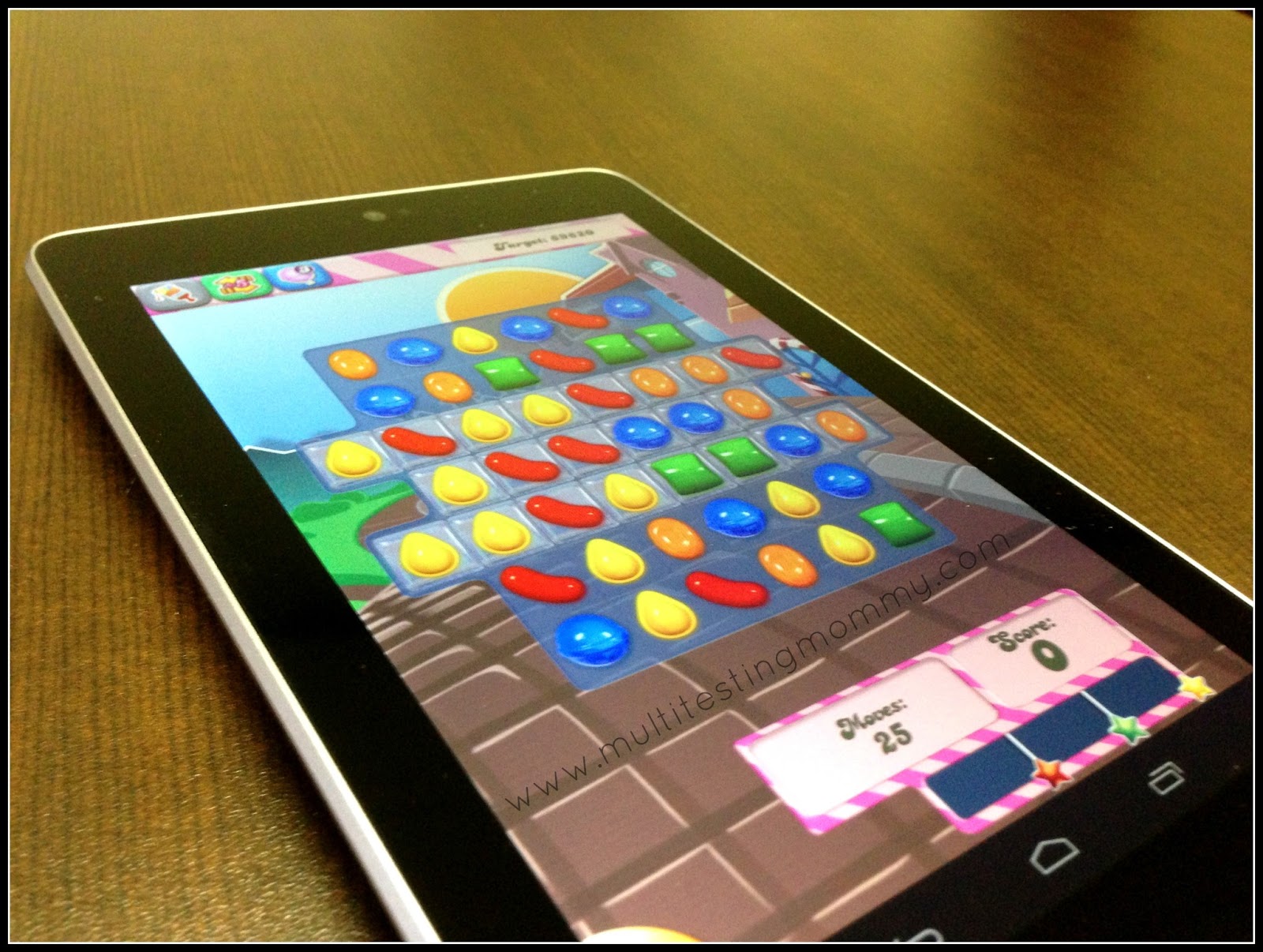 Overall, I enjoyed using the Nexus 7. I do not think it will replace either of my other devices, but only because my other tablet has a 9.7″ display which fits both my (somewhat large) hands comfortably side by side in landscape mode. The Nexus 7 makes a good browsing and media consumption device, and handles mobile games admirably.

This review was written by my hubby!
He says he is “A husband, a father, and an engineer. In that order.”