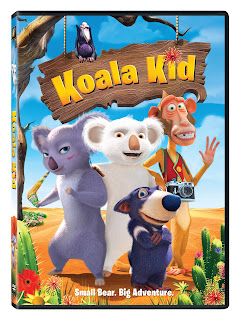 On April 30th, 2013, Koala Kid is being released in stores on DVD! I cannot wait to add yet another fun movie to our kid movie collection for Family Movie Night! If you would like your opportunity to win a copy of this DVD for your family, be sure to enter the giveaway below!

Check out the amazing voice talent in this movie:
Rob Schneider
Emmy-nominated actor Rob Schneider is best known for his longtime working relationship with Adam Sandler and Sandler’s production company, Happy Madison. Schneider has starred in several Happy Madison projects, including You Don’t Mess With The Zohan, 50 First Dates, The Longest Yard, Little Nicky, Mr. Deeds and Grown Ups. Schneider also co-wrote and starred in Deuce Bigalow: Male Gigolo, and the sequel, Deuce Bigalow: European Gigolo. More recently, Schneider has broadened his focus to include directing, producing and writing.
Tim Curry
Tim Curry is an English actor recognized for his work in a diverse range of theatre, film and television productions in both the UK and the US. Best known for his role in the LA and Broadway productions of The Rocky Horror Show, as well as the part he played in the infamous screen version, Curry’s most recent focus has been on his prolific voiceover career. His distinctive voice can be heard in countless animated television series and films, such as A Turtle’s Tale: Sammy’s Adventure and Curious George 2: Follow That Monkey.
Norm MacDonald
French-Canadian actor, Norm MacDonald, began his career in stand-up comedy. Whilst writing for The Dennis Miller Show and Roseanne, MacDonald was noticed by television producer, Lorne Michaels, who offered him a job on Saturday Night Live. He later became the Weekend Update anchor, heightening his popularity and leading him to have his own show on ABC, The Norm Show. MacDonald also has links with Happy Madison Productions, acting alongside Rob Schneider in Grown Ups, and Adam Sandler in Jack and Jill.
Alan Cumming
Alan Cumming OBE is a Scottish stage and film actor, writer, director and producer. Starring in such blockbusters as GoldenEye, X2: X-Men United and Spy Kids, he has also appeared in, co-written, and co-directed a number of independent films. His Broadway career includes such hits as The Threepenny Opera and Cabaret, for which he won a Tony award. His acting pursuits have however, lately been focused in television and animation. His voice can be heard in such films as The Smurfs and The Smurfs 2, which is also set to be released in 2013.
IT’S GIVEAWAY TIME!
Prize: One copy of Koala Kid on DVD
Open to: Canadian Residents
Giveaway Ends: May 17th, 2013 12:00 AM
a Rafflecopter giveaway
Pin It
Check out our Canadian Online Shopping Directory and Multi-Testing Mommy’s Current Giveaways
Bookmark the permalink.