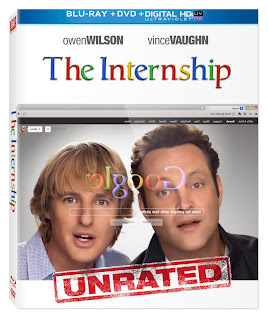 The Internship is a comedy about two friends Billy (Vince Vaughn – from what feels like every “guy” comedy of the last 15 years from Swingers to Dodgeball) and Nick (Owen Wilson – best known to most parents as the voice of Lightning McQueen) who find themselves unemployed and seemingly unemployable fortysomethings after the watch company they work in sales for unexpectedly closes down. They decide to apply for, and eventually obtain, a position for an internship at Google, where they have to compete with recent college grads for a full-time position.

Before we continue, I feel like I need to explain that I am probably the target demographic for this movie: I’m a guy, I’m approaching middle age (hang on a second… typing that makes me feel like I need to go mix myself some soluable fibre, or at least go buy a red convertible), and my office phone extension spells GEEK (seriously; when they were handing out extensions for our new phone system, the guy doing it set that aside for me).

Going in, I was all set to refer to this film as Google Crashers (Vaugh and Wilson co-starred in Wedding Crashers together, and when I originally saw the trailer for this, I thought it was a sequel to the 2005 comedy), but the lead cast is all that these movies share. The Internship is a buddy and fish out of water comedy with a requisite sidebar romance, more along the lines of Old School but without as much innuendo.

The truth is, there are worse ways to spend a couple of hours than watching this film, and there are better. It telegraphs a lot of its jokes, and the characters are mostly two-dimensional. However, this is a comedy and not a “for your consideration” drama, so as long as you go in expecting that, you will not be disappointed.

That being said, I laughed out loud (literally LOLed… not just typed in on Exchang-a-gram – watch the movie and that will make sense) at several parts, and actually told my wife, “Don’t interrupt my movie,” when she came home in the middle of it because I was engaged in what would prove to be the most real scene in the film (the sunrise over Golden Gate Bridge for those curious souls).

Overall, The Internship is an enjoyable but predictable comedy. I personally watched the unrated version, which is definitely not appropriate for children under 16 (maybe older; my kids are a lot younger than that right now so I have a hard time gauging things like this – put it this way, when you’re comfortable with your kid seeing a strip club scene with nudity, they are old enough to see this movie), but the rated version is PG-13 and a quick check on IMDB suggests the raunchy stuff (including all nudity) has been edited out, so it might be OK for younger viewers.

IT’S GIVEAWAY TIME!
Enter HERE to be eligible to win a copy of The Internship

2 Responses to The Internship {Movie Review}