A couple of months ago I wrote a review of the Nexus 7, where I ended it by saying,

Overall, I enjoyed using the Nexus 7. I do not think it will replace either of my other devices, but only because my other tablet has a 9.7″ display which fits both my (somewhat large) hands comfortably side by side in landscape mode. The Nexus 7 makes a good browsing and media consumption device, and handles mobile games admirably.

And then I got an idea: 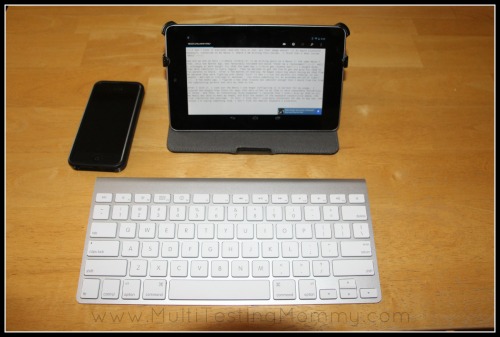 (I don’t know if everyone realizes this or not, but that image above? Is an Apple bluetooth keyboard, connected to my Nexus 7, where I am writing this review. I think that’s what called “meta”.)

How did we end up here (where here is me writing posts on a Nexus 7; the same Nexus 7 that, only two months ago, was favourably reviewed but would “never be a replacement”)? Well, a colleague at work bought his iPad the same day (third gen release day) I bought mine; they were identical in every regard. Then he decided to get the fourth gen and give his iPad to his parents to share. After a few months of sharing, he began inquiring about buying my iPad from me because they were fighting over whose “turn” it was (cue the parents all nodding; no two people – married or siblings or whatever – can share something for an extended period of time). A few weeks ago, I figured a new iPad release was imminent enough that I would free him from the complaining parents and sell my iPad to him.

After I sold it, I took out the Nexus 7 and began configuring it in earnest for my usage. I scoured the Google Play Store for apps that were either on my iPad or were reasonable facsimilies of those. And then, an interesting thing happened: I realized that I didn’t miss my iPad at all. My Nexus was able to meet my needs, and with the advent of the keyboard connectivity above, the size limitation was overcome. In fact, I find the 7″ size more convenient for day to day use, and unless I’m typing something long, I don’t find the smaller keyboard a hindrance.

I was able to connect the Nexus to my Exchange server at work and synchronize all my work mail, contacts, and calendar, and our server is configured to take over the Settings in a bunch of areas (to make the device more secure for business use). And I was able to load episodes of tv shows on to it simply by connecting the device to my laptop – no more Handbrake (a video converter I use to make iOS-friendly videos), no more iTunes – and copying the files.

Furthermore, I realized that certain gaps in the iTunes App Store (most notably, a free text based code editor for HTML, SQL, C, etc. that I’m using to compose this post) are actually filled in the Google Play Store.

So, will I replace this Nexus with an iPad when the fifth generation comes out? Right now, I would have to say I’m leaning towards no. Apparently, Android just got another iOS convert.

One Response to Nexus 7 Update! #TechTuesday