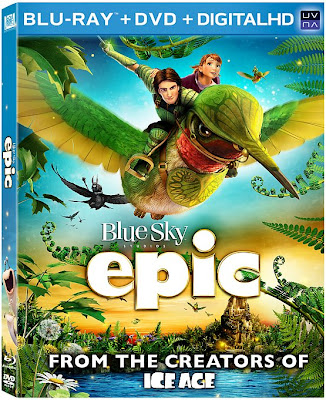 Epic is a computer animated movie whose story is loosely based on the children’s book The Leaf Men and the Brave Good Bugs by William Joyce. It tells the story of a world in the forest occupied by two inch tall human-like people (the Leaf Men), their allies (anthropomorphic talking animals including slugs and snails, as well as mythical creatures like jinns) and their enemies (the Boggans, which are humanoid gargoyle looking things), the human scientist obsessed with proving their existence, and his estranged daughter who inadvertently becomes part of their world.

Now, when I first saw the trailer for this movie, I have to admit that I assumed it would be a heavy-handed allegorical tale about the environment and humankind’s incessant abuse of it, based on the simple law of modern movies that states:

This is not the case. This is nowhere near the case. I cannot state clearly enough how far it is from the case.

My daughter (who, incidentally, offered me this tidbit of advice based on the fact that “Mommy gained a lot of followers from [her] review”) indicated that the point of the story was not very clear. To be fair, she is eight and expects to be hit over the head with a mallet by the storyteller.

This movie was clever and creative, with a good story and (in my poorly followed opinion) a strong message of everyone and everything being connected (not in a “this world is yours and mine so we shouldn’t spill oil everywhere” way but more in a “we are all part of the same community and should help each other” way): many leaves, one tree.

It was also brilliantly animated (the same studios that brought us Ice Age, Rio, and Robots – a brilliant children’s movie we only recently discovered – made this), with a great voice cast (including a number of musicians: Beyonce, Steven Tyler, Pitbull) headlined (not really, but should have been) by Christoph Waltz (yes, Django Unchained… Inglorious Basterds… that Christoph Waltz).

I thoroughly enjoyed the film and would definitely watch it again (which, having a four and eight year old around, is a strong likelihood).

6 Responses to EPIC – an enchanting movie