Is that Rash Eczema? 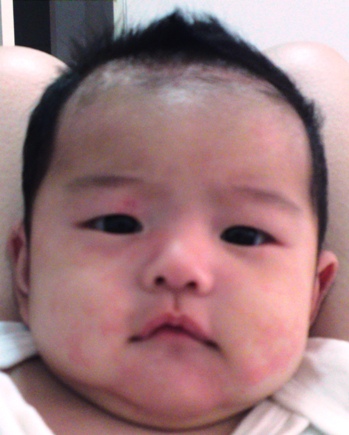 I should have known.
My baby had rashes at two weeks old, and I didn’t think it was eczema, even though my spouse had mild localized eczema. Why didn’t I suspect it was eczema? I was faithfully reading a piece of paper from the hospital that listed rashes as one of the items I SHOULD NOT be worried about. So being a mom of a baby with eczema, and having helped families with eczema children worldwide through my blog EczemaBlues.com, I think helping families recognize eczema is an important step to controlling eczema, and treating it.

Which Rash is Not Eczema
The hospital isn’t entirely incorrect to list rash as something not to be worried about, as there are indeed rashes that will resolve on their own, common ones are:
Neonatal Acne – This looks like pink pimples and no treatment is needed
Erythema Toxicum – Resembles red blotches and will also resolve itself
Milia – Little white bumps on the nose and face and will resolve within weeks
Prickly heat rash – Resembles small red bumps and keeping dry and cool should help resolve the rash

Symptoms of Eczema
Eczema, on the other hand, is a chronic condition and needs treatment. If the rash on the baby doesn’t go away and the baby’s skin is dry, you should suspect eczema. Another characteristic of eczema is ITCH, and this can be seen if the baby looks uncomfortable, scratching, twitching and trying to rub his/her cheeks or area of rash. The rash itself is red and may also appear scaly, or oozing. For babies, the rash commonly appear on the face, body and limbs.

It is important to recognize eczema, so that it can be treated promptly – eczema under control reduces the itch for the baby and risk of infection. So, the next time you see a rash, do observe and in doubt, check with a doctor!

About Mei – Mei is also known as @MarcieMom on twitter, and interviews skin, parenting and nutrition experts worldwide on her blog, EczemaBlues.com. She is the chairperson of Singapore’s national eczema parent-child group and has also illustrated a picture book ‘A to Z Animals are not Scratching!”.

7 Responses to Is that Rash Eczema?