I get pretty excited when I see that KINDER® Canada comes out with new toys! Being a #KinderMom means that we get to test out all kinds of Kinder products, which is awesome, so it really excites us when we get to receive new toys!

Recently we received a box of the new Hot Wheels™ and Barbie™ Kinder Eggs to test out! As much as I love the fact that the traditional Kinder Eggs are gender neutral and that the toys appeal to everyone, I can see how children can get VERY excited about Barbie and Hot Wheels specific Kinder Eggs. My children sure did! I will say, however, that even though the Barbie ones are marketed towards girls, it wouldn’t surprise me in the least if at least one time my four year old son asks for one of those instead of the Hot Wheels one. Likely, he will do this because he admires his older sister and wants to have everything the same as her, but I would also like to state my opinion that there is nothing wrong with a boy wanting to open up a doll toy!

Because there is a 1 in 3 chance in opening a product specific toy, I have to share with you that we may or may not have (wink, wink) opened more than one Kinder Surprise each to get my son a Hot Wheels car. We opened our surprises on one of his “not so good” days and he was VERY upset with his first egg even though I thought it was the coolest toy we had received to date! 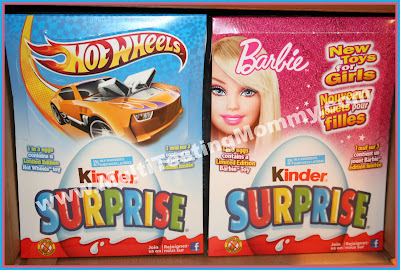 1 in 3 of these Kinder Surprise Eggs contains a Limited Edition Hot Wheels™ or Barbie™ Toy.

For four weeks, you will be able to participate in the KINDER® Barbie™ Hot Wheels™ contest simply by becoming a fan of Kinder Canada on Facebook and by following the instructions.

Disclosure: I’m part of the KINDER® Mom program and I receive special perks as part of my affiliation with this group. The opinions on this blog are my own. See MTM’s Disclosure for more details.